Can robotic mowers revolutionise the turf and sports sector asks Greg Rhodes. And if so, will they pose a threat to wildlife?

The progress of tech can prove irresistible commercially and unstoppable, even in the face of stiff protest from wildlife agencies and campaigners. Robotic lawnmowers (RLMs) are seen by some as a case in point. In the teeth of a recruitment crisis, the landscaping and turfcare sectors are welcoming the advance of what they view as an efficient way to undertake traditionally time-consuming tasks, freeing up groundscare teams to focus on other tasks.

Although still limited in capacity and scope of cut height compared with manned machinery, RLMs are catching up fast, with manufacturers addressing the challenges the technology presents.

The Sports Turf Research Institute (STRI) has conducted sponsored research on autonomous mowers and while results are commercially protected, director Mark Ferguson favours their progress in the sector.

“They are really good generally and the larger machines are excellent for large sports fields,” he says, “and for large gardens, particularly in Europe.”

However there are some limitations as noted by Mark.  “They struggle when cut height needs to be below 25 mm – for fine turf applications for example, which is where cylinder mowers come into their own.

“The challenge is whether manufacturers can adapt a cylinder machine for autonomous use.

“They are a much more efficient way of cutting grass as groundscare staff can send them out regularly to clip a little bit off the height each time, which reduces mulching but allows nutrients to return to the turf. Also, environmentally, it makes sense to leave clippings in place,” Mark concludes.

Gardener Bunny Guinness recently referenced the value of ‘robotic’ mowers in dry times. “They leave the clippings on the lawn so encourage buildup of organic material,” she commemted on Radio 4’s Today programme, “which helps moisture retention.” 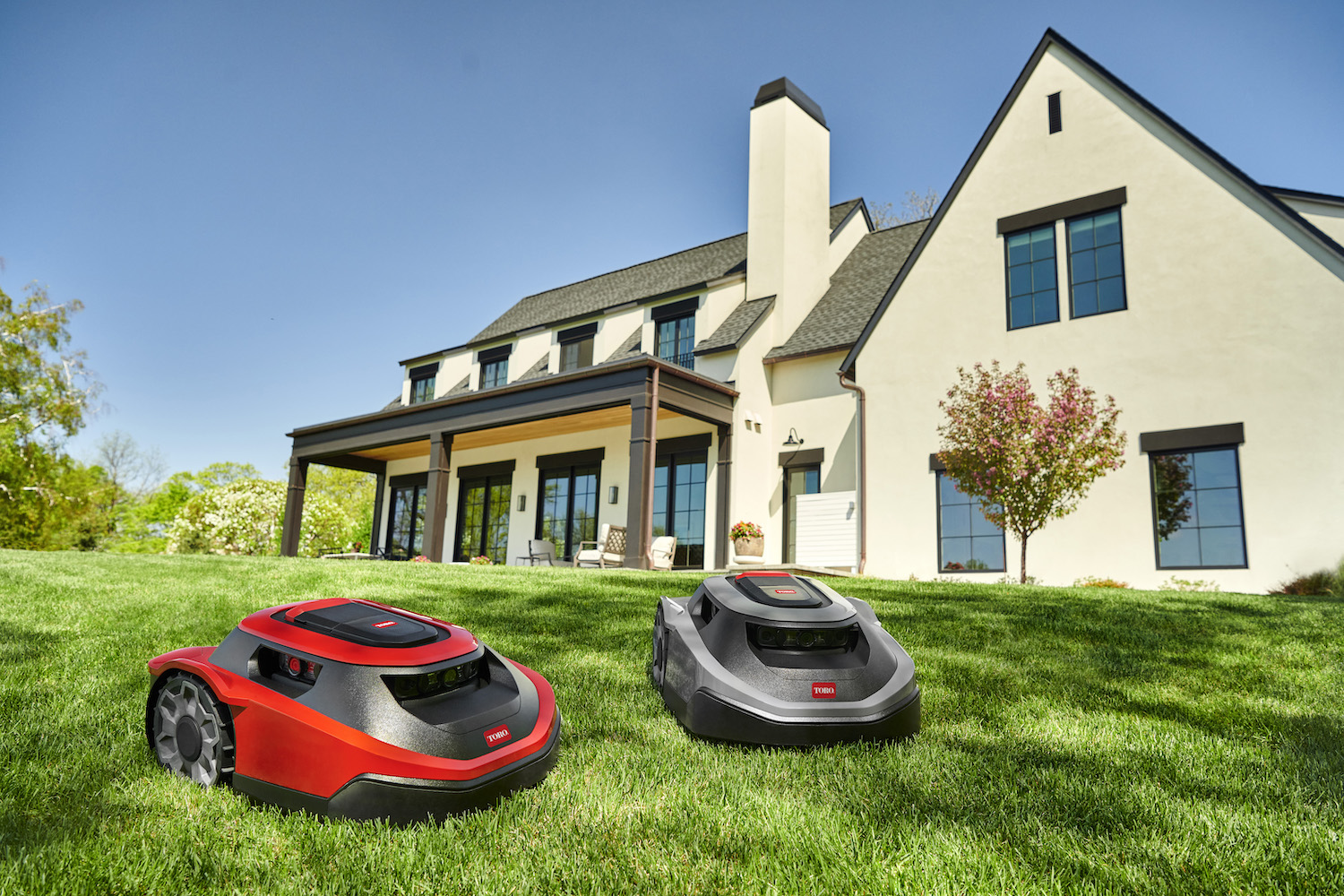 Following extensive research, Toro has unveiled its autonomous mower targeting the residential and landscaping sector. Despite a new study revealing that UK homeowners are increasingly choosing synthetic turf in their gardens, the machinery development company believes there’s healthy potential for such maintenance kit.

“The artificial turf market is growing,” says Anthony Nadalin, senior marketing manager for Toro’s Europe and Middle East territories, “but there is room for both options.”

Operating via a vision-based system, enabled by four cameras fitted on the machine, the mower offers landscapers a powerful incentive to purchase, Anthony explains.

“Mowing is very time-consuming. Using an autonomous mower allows landscape contractors to increase revenue by adding value to their services for sites such as hotels and schools.”

Available in Europe in late 2023, the mower can cover 2,000 m2 to 4,000m2 .“It will be suitable for large gardens and sportspitches, although you would need two units for sports applications,” adds Anthony.

However, Toro is already preparing to size up the model. “A larger-capacity mower should be available in Europe in two or three years,” Anthony confirms.

Hard on the heels of its residential mower, Toro will be introducing a commercial equivalent targeting “selective markets”. The Geolink Solutions autonomous fairways mower is set for launch at the end of 2023.

“The UK is our primary market,” Anthony confirms. “It will use GPS RTK technology within a battery-powered traditional triple mower. The machine is designed to address the labour shortage and golf course operating costs.”

Buy-in price will be higher than traditional ride-on equivalents, Anthony says, and take-up will depend on how tech minded clubs are and how well they can receive a stong GPS signal.

“Not every club will be able to afford to purchase one outright but as a smart connection device, the mower can work within Toro’s Total Solutions package and will be able to talk to irrigation systems for example.”

In Kent, The Ridge Golf Club was the first golf club this year to test drive the robotic offering from Husqvarna, the CEORA™.  The club was brought by local farmer Jack Skinner five years ago, and now he runs it with his wife Sophie and a tight greens team that numbers just three in winter.

“I’m quite hands on,” says Jack, “and do mowing and vertidraining, helping the team with the big jobs.”

Bringing “farming mentality to the golf club”,  Jack was quick to adopt turfcare efficiencies, buying a Husqvarna loop-operated robotic mower for various duties and bringing in a dedicated head greenkeeper.

The challenges of recruiting greens staff, despite paying “over the odds”, have further strengthened his commitment to automated turfcare and in April, he bought Husqvarna’a latest innovation, the Ceora.

Capable of mowing up to 75,000 m2, it is proving just the ticket at The Ridge, Jack reports. “We’re very pleased with it. The mower cuts the fairways equally well in wet or dry conditions, on a cycle of six hours on course, six hours charging, controlled from an app on a mobile device.

“The only maintenance so far is fitting a set of new blades every two to three weeks, and that takes just 15 minutes. If I had the Ceora running 24/7, I’ve calculated we would spend £485 a year on power.””
With plans to invest in another four robotic mowers, Jack sees the potential of this mode of course management. “We want to cut fairways regularly down to 16 mm so that the grass does not regrow as quickly, then the semi rough at 30 mm and rough at 60 mm.”
The team can leave Ceora to do its thing while they devote more time to “detailing” across the course, Jack adds, such as paths upkeep, tee boxes, drainage, plantings and “generally enhancing the course for our 600 members.”

“These are the jobs best done in the summer, which is just the time when greens teams have to spend so much time mowing using traditional turf machinery.”

The 20,000 trees on and around The Ridge mean the Ceora cannot reach right under fringe cover, Jack explains, while the mower can operate up to 500 m from the GPS base station it continually communicates with.

Although currently plugged into the mains, the base station could well be solar powered soon, Jack reveals, along with the mower charging points, as he plans to introduce panels to further reduce his electricity bill. 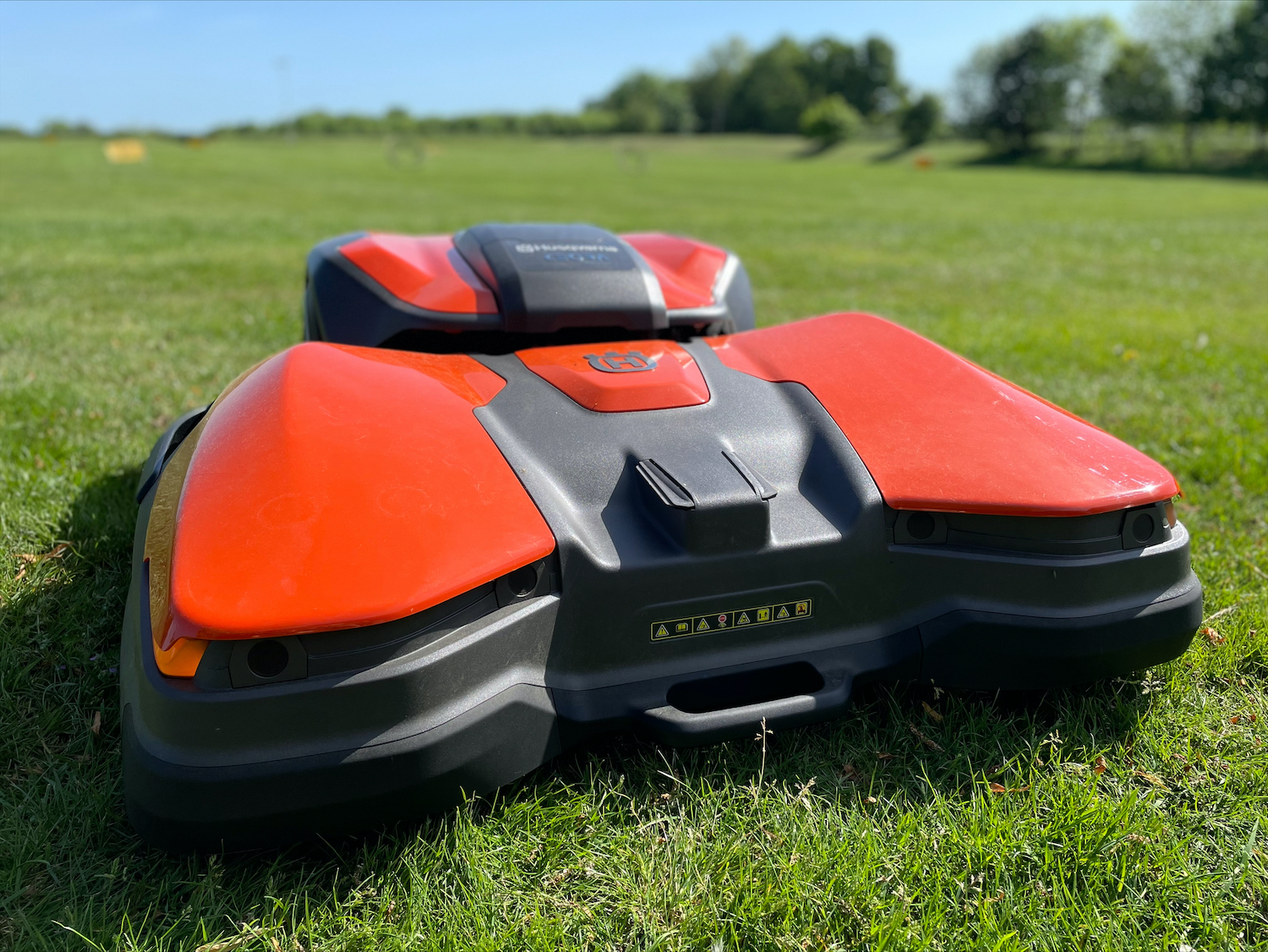 For turfcare needs then, RLMs could be one answer to long-term staffing shortages, especially across sports sites. But do they pose a threat to wildlife –  a question vexing environmentalists?

The issue carries added poignancy when one of our national treasures is in the frame. The European hedgehog is in decline, but the reasons remain unclear, despite a welter of field studies.

Dr Sophie Lund Rasmussen and colleagues from Aalborg University, Denmark and the Oxford University Wildlife Conservation Research Unit have studied the impact of RLMs on the endangered mammal by testing the damage inflicted by 18 different models when they collided with the bodies of dead hedgehogs, collected from dedicated rehab centres after succumbing to various injuries, not necessarily inflicted by robotic mowers.

Each RLM was tested 12 times with four deceased hedgehogs representing four different weight classes, each in three different positions. Some models caused “extensive damage”, the study found, but with “noteworthy differences in the degree of harm inflicted”, while some machines “consistently caused no damage”.

Talks have already begun with manufacturers on ways to modify machine designs to limit risk to wildlife such as hedgehogs, the researchers report, in an effort to encourage a collaboration to develop more wildlife friendly alternatives.

Meanwhile, the researchers recommend restricting operation of RLMs to daylight hours, when hedgehogs are less likely to be active, and checking that smaller animals such as amphibians or baby birds are not hiding in lawns and other stretches of turf.
Was former Poet Laureate Philip Larkin referring to an RLM when he launched into one of his poem’s with “The mower stalled, twice; kneeling, I found/A hedgehog jammed up against the blades, Killed”. Probably not but it certainly highlights a perennial peril these, and other treasured creatures face, as the drive to automation gathers pace.